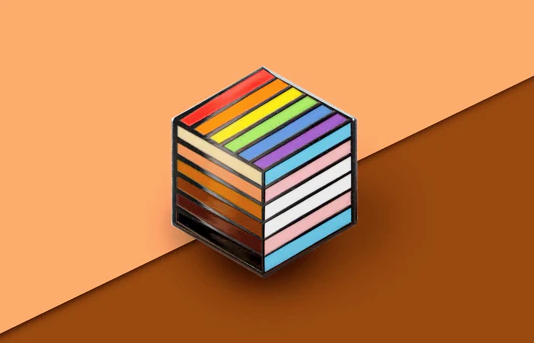 Rainbow pins are small, decorative pins that are worn to show support for the LGBTQ+ community, particularly those who identify as gay. These pins often feature the colors of the rainbow flag, which has been a symbol of LGBTQ+ pride since its creation in 1978. The rainbow flag consists of six horizontal stripes of red, orange, yellow, green, blue, and purple and is often seen at pride parades and events.

Rainbow pins are a popular choice for expressing pride and solidarity within the LGBTQ+ community. They can be worn on clothing or bags and are often seen at pride events and rallies. Many companies and organizations offer special pride-themed items, including pins, t-shirts, and other accessories.

In addition to the rainbow flag, there are also many other symbols and flags that represent the LGBTQ+ community. The pink triangle, for example, was originally used by the Nazis to identify gay men during the Holocaust, but it has since been reclaimed and is now used as a symbol of gay pride. The bear pride flag represents the bear subculture within the gay community and consists of a brown stripe and five horizontal stripes of red, orange, yellow, green, and blue.

Rainbow pins, along with other pride accessories, are a way for people to show support for the LGBTQ+ community and celebrate diversity and inclusion. These items can be worn anytime, but are particularly popular at pride events and rallies. Wearing a gay rainbow pin is a small but powerful way to show support and solidarity with the LGBTQ+ community and to stand up against discrimination and hate.

It is important to recognize and support the LGBTQ+ community, and gay rainbow pins are just one way to do so. By wearing these pins, we can raise awareness, promote acceptance, and celebrate the diversity and inclusion that make our society stronger.